← If You Use Internet Explorer, You May be Stupid
New Look To Tablet PCs → 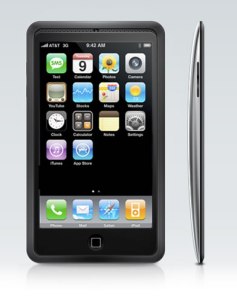 With the upcoming rumors of Apple’s new iPhone, which will either be called the iPhone 5 or the iPhone 4S,  lots of rumors have been rising up.

People have been expecting the launch to be in mid September but a recent report from AllThingsD.com, suggests that we should be expecting not a September launch, but one in late October.

Although many reports on release dates have been put out, Apple has yet to release any tips on release dates or even specs on the iPhone itself.  Some people have said that the iPhone 5 will feature a larger screen (around 4 inches) while others have said that it will remain at 3.5 inches.  Another rumor is that the new design will feature a more “rounded” look to it.  Along with this, almost everyone can agree that the new design will be slimmed down and will include Apple’s new A5 dual-core processor to replace the iPhone 4’s A4 single-core processor.

So obviously, there are plenty of rumors going around to get everyone hyped up about the new iPhone.  We won’t know for sure until Apple releases the specs for the phone.

I am currently a 21 year old Junior in college majoring in Information Systems assurance and security. I am from Arlington Heights, IL. I love all types of technology so I enjoy my fair share of video games, building/fixing computers, programming, and writing on my tech blog, Techtonicc.
View all posts by Techtonicc »

← If You Use Internet Explorer, You May be Stupid
New Look To Tablet PCs →