Android users pay attention because the new Android version, Ice Cream Sandwich, looks to be near its launch date.

Earlier this morning, images from multiple websites appeared showing off what looked to be the new Android Ice Cream sandwich.

One of those sites, Rootzwiki.com, showed Ice Cream Sandwich running on Google’s Nexus S phone (image on right).  The images shown show a new updated notification bar with some updated icons along with a blue theme.  A new customization control panel is also shown.  Many people have said that it looks like the panel that you would see on Android Honeycomb powered tablets.

The other site, AndroidPolice.com, have also uploaded a couple images (image to left).  These images show that the phone is in fact running on Ice Cream Sandwich.  The other image shows what looks to be the notification bar pulled down and has a new black theme to it.

So it looks like Ice Cream Sandwich might come out sooner than expected.  It will most likely be available for Nexus S phones first and then for other phones as the year goes on. 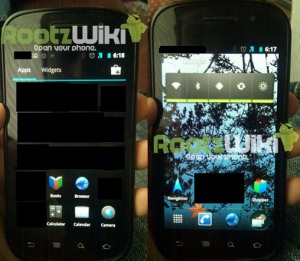 I am currently a 21 year old Junior in college majoring in Information Systems assurance and security. I am from Arlington Heights, IL. I love all types of technology so I enjoy my fair share of video games, building/fixing computers, programming, and writing on my tech blog, Techtonicc.
View all posts by Techtonicc »