Apple Regretting Their “New” iPhone With Competition Coming From Google

Earlier this week, many fans of Apple products found themselves disappointed when the unveiling of Apple’s “new” iPhone (the iPhone 4S) when noticing that everything about the phone was the same with some minor upgrades that didn’t live up to the hype that the media gave.

Apple may start to regret their choice on releasing the 4S with competition showing up from Google.  Just 24 hours after the launch of the iPhone 4S, Google released a trailer saying that “something BIG was coming” which was a preview for their upcoming, much anticipated, Nexus Prime which many people believe will be the first phone to run on Android 3.5 Ice Cream Sandwich.

This week Samsung unveiled in its home nation of South Korea the monstrous Galaxy S II HD LTE, complete with a 4.65-inch Super AMOLED handset with 1280 x 720 pixel resolution — 50 percent more pixels than the iPhone 4S display.  The Nexus Prime is expected to get an LTE modem and a similar high-resolution screen.

Not much is known or could be told from watching the video but there are a lot of people excited for it and now with disappointed Apple fans, Google might be seeing an increase in business in the upcoming months.

Ever since the “new” social networking site, Google+, has opened their doors to the world, it seems that a lot of people want in.

According to Heather Dougherty, a director of research at Hitwise in the US, “Google+ emerged as the third largest site in the Social Network and Forums category last Wednesday [in the US], a day after the site went from ‘invitation-only’ to ‘open access’ available to everyone,”.

“Opening access created a massive spike in market share of visits for the site, with a 1269% growth from the week ending September 17 to the week of September 24. The site … received nearly 15 million total US visits last week.”

Tim Lovitt, with Google, says, “increasing market share for Google Plus more than 455 per cent compared to the previous week”.

Heather Dougherty added in a blog post on the network’s traffic: “In just one week, Google+ went from ranking as [the] 54th most visited site in our Social Networking and Forums category to 8th place.”

This outstanding jump in Google+ states shows both how many people are interested in joining the site AND how upset people are with Facebook’s recent changes. 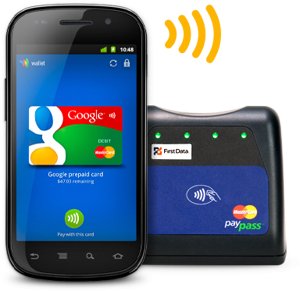 Google Wallet will allow its users to leave their house without the worry of forgetting their wallets as their phone will take its place.  The mobile app uses a chip in the phone so it can be waved in front of payment stations to buy things.  Users set it up by registering a credit card to the phone or loading a Google Prepaid Card with a credit card.  Along with this a four digit password will be required for the user to be able to make the digital transactions.

Google Wallet works only with phones with an NFC (near field communication) chip, which allows secure digital transactions over a short distance.  So unfortunately, the only phone that people will be able to use the Google Wallet with would be the brand new Nexus S 4G although more phones are to be expected with this chip soon.

As of right now, the app is relatively new so paying with Google Wallet is possible only at stores that offer MasterCard PayPass.  A MasterCard PayPass finder is built into the app and displays nearby locations where PayPass works. These can be viewed on a map, in a list or filtered by category. For now, only 150,000 merchants have the equipment in stores to use PayPass.

For now, Google Wallet is new but it is easy to see that digital wallets will be a lot more developed in the near future.

People may not think of “jelly bean” as a good tasting desert anymore as rumors say that it may be the name of Google’s next Android update after Ice Cream Sandwich.

Tech site “This Is My Next” cited a trusted source as saying that “Jelly Bean” will continue Google’s tradition of naming Android builds after sweet treats in alphabetical order.

“We’re hearing from another well-regarded source that Jelly Bean is in the running for the name, but that the choice hasn’t yet been finalized by Google; for what it’s worth, the pickings are fairly slim for desserts with ‘J’ names, so Jelly Bean seems like a solid choice,” it said.

According to the site, there will be some major architectural, design and functional changes since the release of Google’s last update, Ice Cream Sandwich.

Also, it said that with rumors of the Ice Cream Sandwich-powered Nexus Prime from Samsung hitting fever pitch lately, it seems likely that an announcement is imminent.

It seems like Google is almost ready to reveal their new programming language that they call “Dart” which is structured for web programming.  Google confirmed the “secret” project on the Goto International Software Development conference website and they will most likely make the announcement on October 10th, when we will find out what it can do and how it works.  Dart will make a nice addition to Google’s “coding collection” with Go, JavaScript, and Python.

Google announced this morning their recent purchase of Motorola for the price of $12.6 BILLION.  The deal will be completed by late 2011 or early 201.

This now means the Motorola will now only be manufacturing Google (Android) phones.  And although Google is deciding to keep their platform open, people are starting to see that Google is becoming more like Apple.  Also, besides Google now being able to design hardware for its software, Motorola also came with thousands of patents which are steadily increasing in value.

If and when this deal goes through, competition in the smartphone “world” will become a lot more competitive. 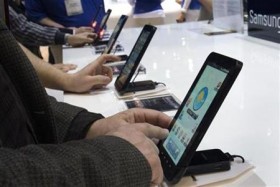 So a teaser video on YouTube has been put up showing off the Samsung Galaxy Tab 2’s specs and features and comparing it to the iPad 2, there seems to be strong competition.

The Galaxy Tab 2 will still have a 7 inch display but this time, the resolution will be 2048×1200.  The device is also said to support a 3D display and it will be run on NVIDIA Tegra 2 dual-core processor.

Overall, the Samsung Galaxy Tab 2 looks to be a huge competitor towards not only the iPad 2 but also other tablets coming out soon such as RIM’s PlayBook.

On my blog yesterday, I typed about one of Verizon’s upcoming 4G phones, the DROID BIONIC.  Today’s blog is yet another 4G Verizon phone called the HTC Thunderbolt.

Announced a couple days ago at CES, the Thunderbolt looks pretty impressive.  It has a 4.3 inch touch screen display, front and rear facing cameras and runs on Android 2.2 mixed in with HTC’s Sense 2.0 display.

Looking at the phone, it looks to be a media based smartphone.  A 8 megapixel camera that records in HD is just the tip of the iceberg. Besides this, its wireless DLNA allows the device to stream video and other media to other DLNA devices such as HDTVs.  It also comes with a 32GB microSD card and there is a stand built in the phone to make things more comfortable while watching HD videos.  To top it all off, the phone’s audio is considered surround sound.

All of this on top of a 4G network seems to be pretty impressive.  Looks like we will have a ton of more smartphones on the 4G network coming our way.

As stated in my latest blog, I mentioned that this will be the year of the tablet PC and so far, it’s been right.  The Consumer Electronics Show, CES, has shown over 80 tablet devices that are all unique in a certain way.

Earlier today, Asus announced their running in the tablet competition by announcing four different tablets that they will be creating.  These being the Eee Pad Slider, Eee Pad Transformer, Eee Pad MeMo, and the Eee Slate EP121.  Not many details of the tablets were announced but a brief overview was given.

First off, the Eee Pad Slider. The Transformer can also be described with the Slider as they are very similar in structure. Both tablets will have a super thin 10.1 inch touch screen display and also a slide out keyboard (shown to the left). When the keyboard is slid out, the screen will be propped up on an angle making it a lot easy to use and see things on the screen. One difference between these two is that the Transformer will be able to detach from the slide out keyboard so you can carry it around as you would with a iPad or Galaxy Tab.  Both of these devices will run on Android’s latest operating system, Honeycomb, which was specifically designed for the use of tablet PCs. The Slider will cost anywhere from $499 to $799 and units will be available sometime in May.  The Transformer will be $399 to $699 and will be released a month earlier, April.

Next up is the Eee Pad MeMo.  This tablet is a little bit smaller than the Slider and Transformer  going at a 7 inch touch screen display.  Unfortunatly there is no slide out keyboard, you use it just as you would with an iPad.  You have the option of either using your fingers or a stylus which comes with it. The MeMo will run on a Snapdragon processor and will have the ability to playback video in 1080p.  The device will nott be available until June and will cost anywhere from $499 to $699 which leaves me wondering why is costs so much if it is smaller and has no keyboard when comparing to the Slider and Transformer.

Finally, we have the Eee Slate EP121.  In my mind, this is what a tablet PC should be like (except should have a keyboard).  This is the largest out of all the devices released from Asus.  The Eee Slate has a 12.1 touch screen display and a powerful Intel Core i5 processor.  This alone seperates it from other tablets out right now.  On top of this, it will also be running Windows 7.  This is what I believe tablet PC’s should look like. Not taking down Android but I think a actual PC operating system should be used on tablets, just my thoughts (comment below telling me what you think). Anyways, this device will cost somewhere between $999 and $1099.  Not stated when it was coming out but we can only hope soon.

CES will bring many incredible electronics for 2011

If you are a major follower of anything related to technology then you should know about CES (Consumer Electronics Show) coming up in the next couple days.  The show will start on Thursday and run until Sunday the 9th.  Over this time period, over 2,500 companies will be showing over 20,000 new products that will be either announced, shown or released.  Out of these 20,000 many will be tablets or tablet related products.  Hence, why people are calling 2011 “the year of the tablet”.

In the past years, the show has been the birth of Blue-ray, DVDs, HD televisions, 3-D televisions, and even all the way back to Atari’s game “Pong”.  Knowing all of this, the show promises this year’s to be bigger and better.  Well, it is definatly bigger.  There is an 11% increase in size from last year making the show cover about 1.6 million square feet!

But anyways, as stated earlier, this show seems to be mainly focused on the tablet as many companies are joining the competition such as Toshiba, Motorola, and Acer.  There will be over 80 tablet computer put on display at the show so obviously there is a lot to look forward to.

That’s it for now, in a couple days there will most likely be a ton of blogs posted because of the massive amounts of new products being released so subscribe to this blog or just keep checking back because it will be a very exciting week!