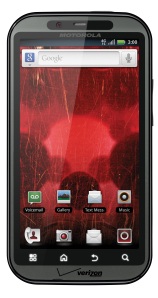 At CES on Wednesday, Verizon officially announced a ton of new phones that will be put on their new 4G network which is said to be up to 10 times faster than 3G.  One of the smartphones announced that stood out to me was the DROID BIONIC.  With this being the latest phone in the droid series, it has a lot to offer.

The BIONIC has a 4.3 inch HD touch screen display, and both front and rear facing cameras (rear is 8 megapixels).  The phone will also have an HDMI output so you can watch all of your HD recorded clips on your television as well as purchase HD content and view it in full 1080p.

Besides this, the BIONIC’s most notable feature is its processor.  A new rising feature in smartphones in the upcoming future is dual core processors and the DROID BIONIC will have one with both cores running at 1GHz. To people who do not know what that means, it will be running at about twice the speed of a regular smartphone. The phone will also have 512MB of RAM. These two features alone make this smartphone incredibly fast which will increase speeds while multitasking. To help out with graphics, the BIONIC comes with Adobe Flash Player and HTML 5.

This is said to be a work device so that being said, it will come with corporate email, data security and encryption capabilities.  The phone will also have Quickoffice, full calender management, one-click conference calls, and tons of Google applications/services.

It’s hard to believe that a phone has come this far. Dual Core processor, HD camera, HTML 5, and game graphics that are console quality is insane.  Verizon definatly is setting the bar for smartphones this year.

Recently, Nokia announced their latest phone, the Nokia N8.  Being a very slim, light phone, the N8 has a 3.5 inch touch screen.  Also, the phone comes in five different colors!  From what I have seen, not too many phones give you the option of that many different colors.  There is black, silver, green, blue, and red.  Take your pick.

Most likely the first thing that you will hear about this phone is the extremely high definition camera.  The Nokia N8 includes a whomping 12 megapixel camera and a Xenon flash, making it one of the highest quality phone cameras on the market as of today.  The N8’s photo viewer offers pinch zoom and sharing your photos on different social networking sites.

To add on to the photo quality, the N8 also shoots HD videos in 720p at 25 fps. The phone supports video files of up to 2GB.  The N8 also comes with a 16GB memory stick but can be upgraded to 48GB if you so choose.

The Nokia N8 is being released in the fall of 2010 in Europe for around $500 (most likely because of the camera quality).  There has been no word of T-mobile or AT&T picking this phone up so if you are interested in it, then your only option might be to get it on their online store.

My thoughts on this phone are all positive.  A great, lightweight smartphone that shoots in 720p and has a unique 12 megapixel camera included.

What do you think?