Firefox 6.0 Debuts Ahead of Schedule 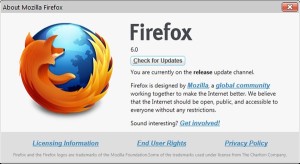 Just like Mozilla Firefox 5.0, Firefox 6.0 is being “unofficially” released earlier than expected.  That’s right, Firefox 6.0 is now available for you to download if you so choose although the official release of the update has not been announced.

N0w Firefox 6.0 will not be bringing many changes to desktop versions of the browser (besides some changes in the address bar), changes will mostly be occuring in Android devices.  It is said that the latest version will bring a “fresh visual style in Chrome Gingerbread”.  Other features included in the update are enhanced image scaling and more importantly, the app is now faster and doesn’t use nearly as much memory.