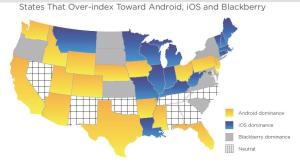 Another state has just been added to the long list of Android dominance over iOS and Blackberry.  The state is both Apple’s and Android’s home state of California that Android recently “took over”.

As seen in a map here, Android has become the “go to” smartphone operating system in the south and southwest part of the United States while iOS is preferred in the Midwestern part.